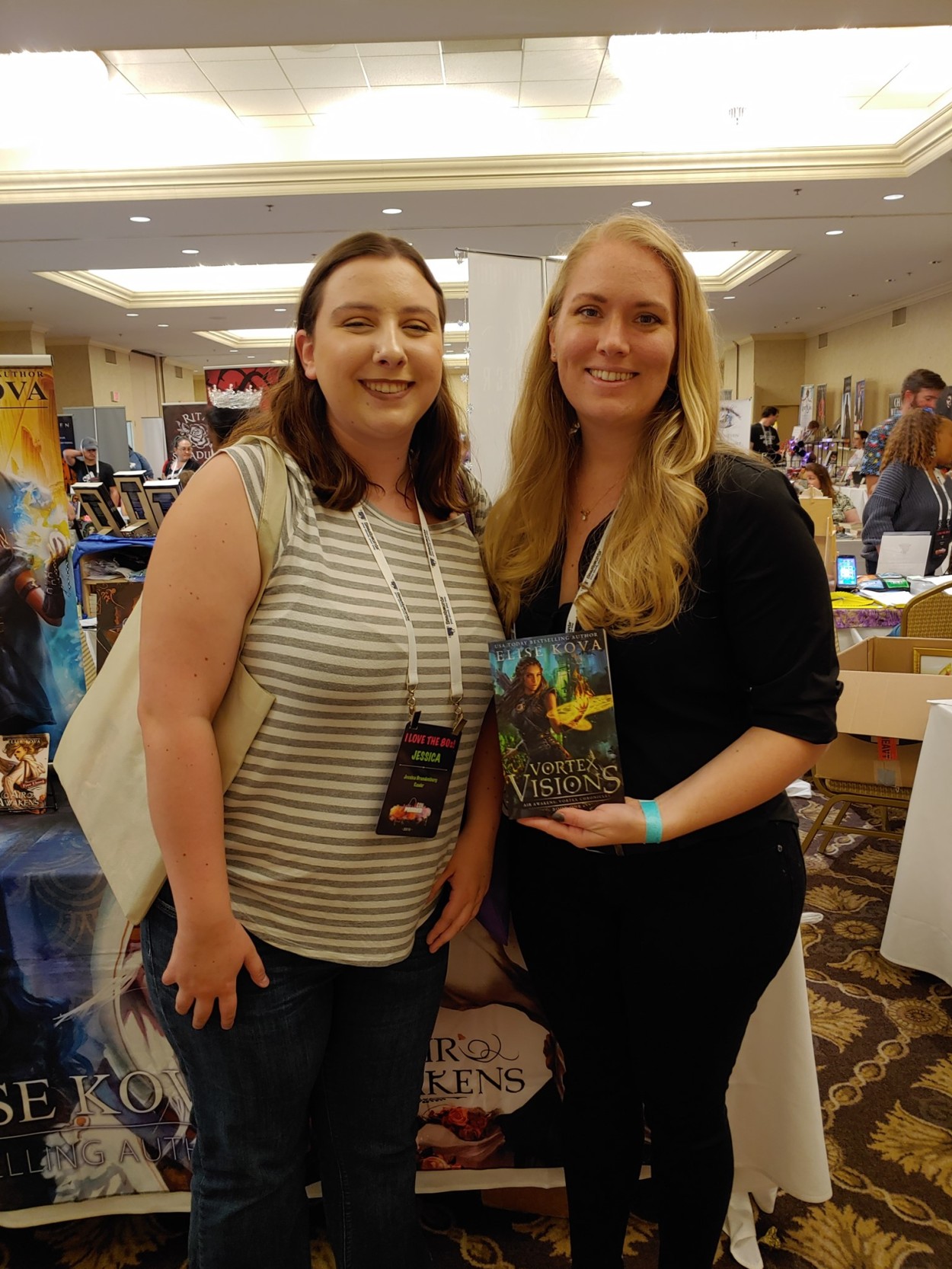 Hey, guys!  Today I’m coming to you with possibly one of the most exciting things I’ve ever done.  I was lucky enough to be able to interview Elise Kova!  She’s the USA Today bestselling author of Air Awakens, The Alchemists of Loom, the Wish Quartet, the Golden Guard Trilogy, and her current ongoing series Air Awakens: Vortex Chronicles which is a continuation of the original Air Awakens series.  I had the pleasure of meeting her at Penned Con 2019 and I’m so excited, so let’s get on with the interview!  (JB = me, EK = Elise)

JB: Let’s talk about Air Awakens for a second.  You are currently writing the sequel series, Air Awakens: Vortex Chronicles.  What made you want to dive back into that world?
EK: Air Awakens: Vortex Chronicles is actually the second time I’ve “dove” back into the Air Awakens world. The first time was with Air Awakens: Golden Guard Trilogy, three stories which follow the formation of the Golden Guard.
But, to more directly answer your question… Vortex Chronicles was always a planned series. There was foreshadowing and other groundwork laid for it in the original Air Awakens series. So it’s been really exciting to finally get to share the full story with readers and see people cobble together all the hints I’ve placed along the way in Air Awakens and the Golden Guard Trilogy.
JB: I remember reading that the Air Awakens series was inspired by the song “Clarity” by Zedd ft. Foxes.  Were there any other parts in any of your series that was inspired by other songs as well?
EK: Goodness, music plays a key role for me when writing and Zedd has been a big muse of mine. Two of his other songs which has helped really inspire characters, worlds, or scenes are…
Transmission (feat. Logic & X Ambassadors) – The Loom Saga

JB: I also read that you love anime!  Since my blog is about books and anime, can you tell me what some of your favorite anime are?  Have any inspired you in your writing?

EK: Oh I’m certain anime has inspired me in many ways that I don’t even fully realize myself! Some of my favorite anime are Revolutionary Girl Utena, Mawaru Penguindrum, Your Lie in April, Descending Stories Rakugo, Cowboy Bebop… There’s more, I’m sure. I’ve watched a lot of anime, so I feel like I’m constantly saying, “Oh yeah, I really enjoyed that one, didn’t I?”
JB: Besides watching anime, what else do you enjoy doing when you’re not writing?
EK: Video games! They actually inspire my writing some, too. For example, my Loom Saga was in part inspired by the game Bloodborne. Currently, I’m playing Dragon Age Inquisition for the first time and (not surprisingly) loving it.
JB: I’ve seen some of your occasional cosplays before.  I remember seeing that picture on Instagram once where you dressed up in full steampunk garb for The Alchemists of Loom.  Out of curiosity, do you make your own costumes?
EK: I used to, when I was in college. But I’m at that point in my life where I don’t have time for that anymore. Gone are the days of my sewing table and dress form. I really admire people who can and do, however. It’s just no longer a priority for me to do in my free time. So if I dress up I’ll usually buy, but then modify if/as needed.
JB: What are some of your favorite books/authors?
EK: A Man of His Word, series by Dave Duncan
Uprooted by Naomi Novik
Harry Potter, series by J. K. Rowling (of course)

EK: I love being an indie author (self-publishing). I studied business in my graduate program and have always seen myself as an entrepreneur who also happens to be an author. So while there’s the creative side of me that loves creating my worlds, seeing my characters come to life on covers, learning the craft… There’s also a business minded side of me that really sees publishing like a business and my books as a product. I think indie publishing is really great for people like me who enjoy both sides of the equation.
JB: Are you a plotter or a pantser, and which do you feel is most effective?
EK: I’m a bit of both. I’d say mostly a plotter. I do tend to create long outlines which I edit as much as I can and really analyze before I draft. But sometimes, when drafting (or after) things just don’t work out the way you want them to and you have to pants. And once one thing goes off the rails it tends to drag others with it.
As far as what’s most effective… the answer is honestly, “Whatever helps an author gets words on the page.” Every author has a different process for drafting and that process affects their editorial as well. So whatever makes the overall novel writing experience as painless as possible for the author is the “right” answer.
JB: Do you write mainly on a computer or do you write by hand?
EK: Computer. The only thing I’ll write by hand is world-building notes when I’m first beginning to develop a concept/world. Then I may carry a small physical journal around with me to jot down notes in and see what comes of them. But it’s not long-form prose.
JB: How do you balance writing and your personal life?
EK: I feel like this is more of a question for the Man. Unfortunately he’s not around right now, so I’ll have to channel him.
The honest answer is, sometimes, not very well. I tend to be one of those “deep flow” writers. No matter how much I try to be “good” and split out my daily word counts to write a little each day, I somehow always end up with a week where I’m busting out 8,000 words a day and am utterly down and out for the count the next week. Naturally, during those weeks of being really busy, the Man tends to be the one making sure I eat, sleep, and shower.
I have tried to get better about it though. One of the things I did this year is take weekends off. Which is actually hard, and I don’t always succeed. But for the most part it’s been really healthy to have a break during the week where I walk away from my writing and business.

JB: What advice can you give aspiring writers who struggle with motivation or are experiencing writer’s block?

EK: You can’t edit a blank page.
Every author I know thinks their drafts suck.
Editorial is a beautiful thing and (usually) a lengthy process for a reason. Your manuscript WILL get better. But refer back to the first thing, you can’t edit a blank page, so get the words down however you can and stop worrying so much about if they’re “good.”
As far as writer’s block… I usually find that sets in when there’s a problem with the story. There’s something wrong with how the characters got to where they are, the pacing, you’ve written yourself into a corner… something. So I think the best thing to do is go back and really look at what you’ve written before now and try to figure out why it’s such a struggle to move forward. Chances are if you strategically edit something you may be able to proceed without issue.
Thank you for reading!  Feel free to check out Elise Kova’s website by clicking here.
Interested in buying any of her books?  I’m now a Book Depository affiliate!  Use my link  to purchase these books (free shipping/delivery and they ship worldwide!) and I receive a small commission!  Thank you for your support! 🙂